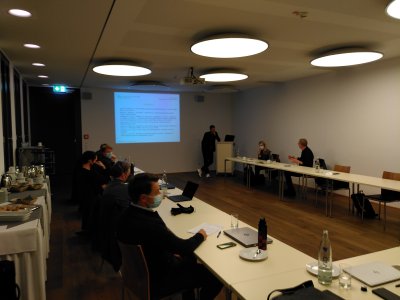 On November 3rd, 2021, the GSPC’s faculty and PhD candidates met for an in-person workshop on Ruhr-University Bochum’s campus. We discussed justice, identity, participation, and security as the four central dimensions of political cohesion, each being introduced by a presentation from our faculty.

The first presentation was held by the GSPC’s current Spokesperson, Prof. Dr. Corinna Mieth, during which she introduced three perspectives on Justice and Political Cohesion. The first is that of Moral Liberalism, which can be traced back to Kant and Rawls. Here, just institutions motivate moral beings to support them because they perceive them to be just: political cohesion comes through justice. The second, communitarian perspective, turns this around by assuming that justice is a result of the shared values of the community. A common history, shared nationality, and/or shared substantial values therefore lead to a higher degree of political cohesion in a given group. Lastly, according to Hobbesian realism, humans are egoistic and aim at peace and security for the sake of survival. Here, political cohesion relies on everyone seeing political institutions in their self-interest: stability is rooted in the human interest in peace, not in justice. While moral liberalism is often criticized as unrealistic in the face of pluralistic societies, Hobbesian realism offers a more inclusive model than communitarianism at the expense of substantial ideas of justice. To ensure democratic stability, Prof. Mieth introduced the notion of democratic cohesion as a shared understanding of values and standards of legitimacy that underlie liberal democracy and can lead to compromise in the face of political disputes.

Prof. Dr. Christian Neuhäuser held the next presentation on Identity and Political Cohesion. He introduced an analytical approach to identity in order to clearly work out the interplay between political cohesion and identity. Personal identity relates to properties that constitute individual human beings as persons, while identity of personality refers to those properties that make human beings into distinct, unmistakable individuals. Collective identity can be understood either as the identity of collectives or as shared identity, when properties that are part of the identity of individuals are being shared with others and highly valued. Focusing on the political dimension of collective identity, the shared properties become politically significant, when they a) lead to discrimination, b) grant privileges, or c) are not only an individual property, but the fact that they are shared is a part of the personality. Prof. Neuhäuser introduced three ideal-types of political cohesion within collective identities, which interact with one another. First is loyalty, when individuals are committed to a shared value system. Second, solidarity, is when individuals are committed to each other. Third, tolerance, is when individuals are committed to living together in a peaceful way. These three types of cohesion can either clash and weaken or collude and strengthen each other, e.g. loyalty would be strengthened if political identity groups and polity are overlapping. This framework can be applied to real-world cases to explain and describe the effects of collective identities on political cohesion.

In his presentation on Participation and Political Cohesion, Prof. Dr. Stefan Schirm introduced the analytical approach of scholars of international relations. Unlike normative approaches, the goal is not so much to describe how the world ought to be, but rather to explain why the world is and to think about how it can be reformed. To do so, real-world observations must be linked to a theoretical explanatory framework. For instance, one observation relating to participation and political cohesion is that more people on both ends of the political spectrum strive to restrict economic globalization and at the same time, we see an increasing degree of polarization in many liberal democracies. Regarding the theoretical framework, the underlying assumption is that governments are generally receptive to voters’ needs, since they want to be re-elected. Having looked at both material as well as ideational reasons for the rejection of globalization policies, political scientists learned that the income of workers often stagnated and the distribution of income gained heavily privileged the wealthy. This leads even those who did not lose income to be distrustful of globalization due to the resulting inequality. In many places, both of these concerns were taken up by populist parties, who constructed anti-liberalization/globalization narratives, focusing on redistribution and “taking back control”. On the other hand, an example of increasing political cohesion can be seen during Joe Biden’s presidential campaign, where he put a special emphasis on including the demands of those formerly neglected parts of society. 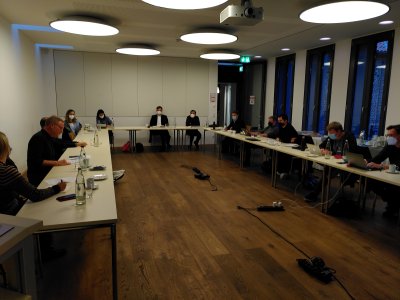 The last presentation of the workshop was held by Prof. Dr. Schuck on Security and Political Cohesion. Realizing that the academic debate on cohesion is dominated by a fixation on social cohesion, he identified two problems: first, that there have only been very first steps in political science research to explore cohesion-aspects beyond individuals and groups with their values, norms, and identities and second, that the term ‘political cohesion’ hardly even appears in the literature and is not applied systematically in the rare cases where it does appear. In order to frame political cohesion, the scope of (social) cohesion has to be broadened beyond individuals/groups and their norms/identities. Prof. Schuck therefore suggested to use political cohesion when it comes to cohesion effects of organizations and regimes. This can be linked to a traditional understanding of security focusing on state security as opposed to an expanded understanding also capturing aspects of human security. Neoliberalism as an IR-theory strongly emphasizes the role of international organizations (UN, NATO, OSCE etc.) and international regimes (agreed procedures, rules, patterns of behavior between states and international organizations) and is consequently well suited to provide a link between security and political cohesion focusing on security-based institutions and their regimes. Some examples for fields of research bringing political cohesion and security together include the withdrawal of US-troops from Afghanistan or Turkey’s ambiguous role in NATO.

Thank you very much to our faculty and PhD candidates for the interesting discussions. We are looking forward to our next meeting!