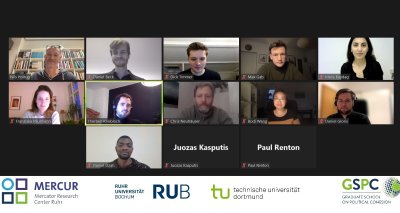 On January 19th, 2022, the GSPC hosted a digital colloquium with Prof. Dr. Nils Holtug from the University of Copenhagen.

Prof. Holtug presented parts of his recently published book The Politics of Social Cohesion – Immigration, Community and Justice. In his talk, he addressed the so-called ‘progressive’s dilemma’: that liberal democracies can have a liberal immigration policy or a generous welfare state, but not both. According to the sociological version of this argument, immigration increases ethnic diversity, which in turn drives down social cohesion (measured in degrees of trust and solidarity), which forms the basis for citizens supporting a welfare state.
He argued that it is far from clear whether ethnic diversity actually undermines social cohesion. By taking into account empirical studies on the impact of diversity on trust and solidarity, he showed that the claim that ethnic diversity necessarily weakens the welfare state is too strong a conclusion. Furthermore, there is also evidence that states can moderate the impact of diversity on trust and solidarity, preventing them from rejecting duties to work towards more open immigration policies based on concerns for social cohesion.
Prof. Holtug went on to challenge the social cohesion argument on normative grounds, arguing that it assumes that equality has domestic scope only, when actually, it should be seen as having global scope. Drawing on accounts of luck egalitarianism and equality of opportunity, he argued that the same features that make distributions unjust domestically could also be found on the global level. By rejecting arguments in favor of domestic scope, Prof. Holtug argued that equality should be seen as having global scope. When assessing the potential risks on social cohesion and domestic equality, one therefore also has to take into account effects on global equality. More open immigration policies, then, might still be justified given their potentially positive effects on global equality, despite potentially negative effects on social cohesion or the issues of brain drain, fiscal balances, or feasibility constraints due to in-group bias.
With his interdisciplinary approach, combining rigorous empirical analysis and normative political theory, Prof. Holtug exemplified some of the core ideas of the graduate school. The GSPC therefore thanks Prof. Holtug for following Thorben Knobloch’s invitation and discussing his ideas!